Throwback!! Rosenberger and Morgan reflect on year in USG April 12, 2004

Rosenberger and Morgan reflect on year in USG

After devoting a full year of their lives to leading the Undergraduate Student Government (USG) through both high and low points, USG President Ian Rosenberger and Vice President Takkeem Morgan look back on their experiences with gratification, regret and hope for the future leaders of the organization.

Rosenberger said he wishes he and Morgan could have made more progress on their platform goals, but he feels as though achieving those goals was only a small part of his job.

Morgan said he thinks he and Rosenberger were most successful with their lighting initiative.

State College Borough Council agreed to increase lighting in problematic areas downtown — a four-year project that will cost more than $1 million. Also, poor lighting on campus has been fixed, and several new lights have been added.

The lighting initiative came at a time when the State College area had an increase in sexual assaults and more demand for safety downtown and on campus.

Morgan and Rosenberger discuss light during walk through 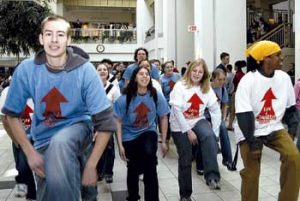 Ian Rosenberger, left, and Takkeem Morgan march through the HUB-Robeson Center during their USG campaign